North FC and Blue Knights SC were the only teams from the 12-team bracket to win all three of its group stage games, taking 9- and 10-goal differentials, respectively, into the knockout rounds. In the semifinals, North FC defeated Spartans FC, 3-2, and Blue Knights SC beat St. Croix Academy in penalty kicks. North FC scored early in the first half of the title game and was able to hold on for the victory. “It was just about a style of play. We knew it was going to hot. We knew the altitude was going to be rough,” said Joe Jovanovski, North FC coach. “We have a lot of technical players, so we wanted to move the ball and tire other teams out. I thought as the weekend progressed and we got into the semis, we really started to open up and get better and better.”

Categories: On the FieldTournament Play 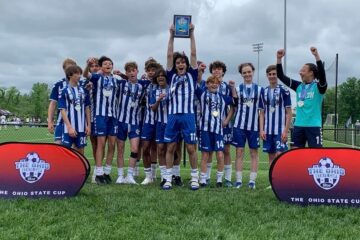 2005 Boys Champions at the State Cup

The North American Soccer Development Academy would like to officially invite your daughter to join us at tryouts for one of our incredible “Soccer” trips. NASDA, North America’s premier “Soccer trip” provider and now a Read more…